After my 20th A/C malfunction in a new Lennar home, I sent an email pleading to Lennar. What I didn’t know is that all three of them were about to go completely silent and not follow-through on any of their promises. Here’s how they responded.

While waiting to have my 20th A/C repair in four years and after I called Mark Metheny, I decided to compose an email to all the Lennar executives that had been on the last conference call. I did a ‘reply-all’ to one of the last emails and started writing. The email went to Mark Metheny – Division President of Lennar, Steve Smith – Director of Construction at Lennar, Rick Hudak – Director of Quality Assurance at Lennar, and it also went to Heather Brown – Mark Metheny’s former assistant.

What I didn’t know is that all three of them were about to go completely silent and not follow-through on any of their promises.

When you settled February 28, 2017, and this issue was supposed to be fixed per inspection and 60 day walk through concerns, and yet #revena and #pete at @Lennar keep avoiding your calls and emails. Guess this is what you get when you buy a @Lennar home! pic.twitter.com/asBeo9hQuj

Here is a copy of the email I sent to the Lennar executives on June 10, 2017 (I’ll insert links to relevant posts and articles to give you additional context on the subjects I reference):

Team –
Hope this finds you well. I have been trying to schedule some time to talk with Mark first.
Some updates:
RELATED:  Lennar's Jim Yeadon Email About Bad A/C Units

In the interim, is there a way to determine how many additional inspections there will be an how much time they will take? I know you all are trying, but please remember I’ve been going through this for four years and it’s greatly disrupted my life and work.

I haven’t been able to take a day off (not a day – not even Christmas) since August of 2015. I have to continuously make up the time I lose in dealing with countless, ongoing issues for a new house. That time has cumulatively added up to over 70, 40-hour working weeks.

Regardless of the late nights, weekends and holidays I use to try and make that time up, it’s time I will never be able to get back. My business is based on time.

More importantly, my quality of life has suffered. My health has been impacted.

The Bigger Issues That Need to Be Solved

Yet another realtor confirmed that I can only fire-sale this place. Even if all repairs are made, she yet again confirmed (this is the fourth broker/realtor and all have said the same thing) that it would likely need to be a cash buyer, would have to be placed well under market value and insurance might be difficult to obtain.

That’s not my fault.

Joel even stated that almost four years ago and shortly after I moved in – and after almost a week of dedicated repairs. Four years later, it’s only gotten exponentially worse.

It becomes worse as each day, week, and month I am here. 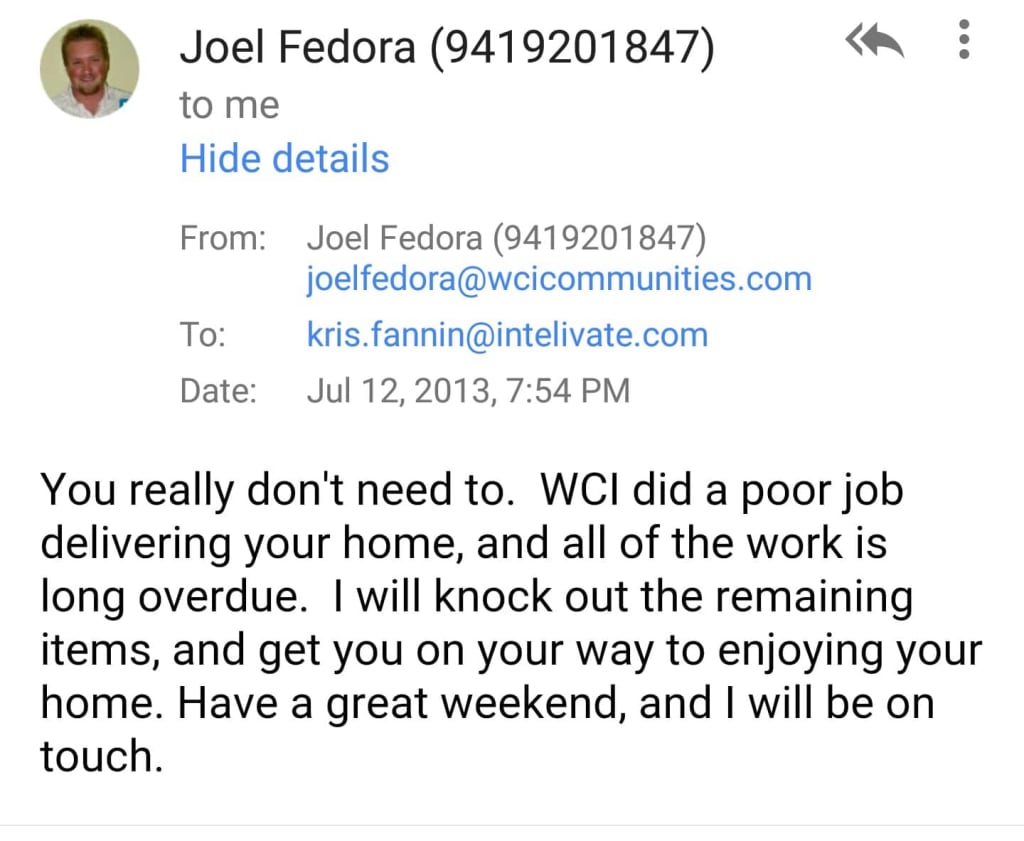 Message received from a Lennar executive regarding my home at Westshore Yacht Club. This was less than two months after closing on my new construction home. It’s been 4.5 years and there are still 80+ ongoing construction defects. I was tired of all of the disruption after less than two months. Imagine how I feel 4.5 years later. I could have no idea that the nightmare was just beginning.

Let me iterate a point made previously….do not buy a @Lennar home. No way to resolve issues. No escalation process.

And now, four years later – I’m stuck. This is the broader issue above and beyond still not understanding the core of some of the issues (the metal corrosion in confined spaces, health, mold etc.).

Both my dogs are developing benign (as of now) and unexplained cysts. The only thing they have in common is the environment in which they live.

It’s now been more than four years. The worst four years I could have ever imagined. It is something I would never wish on anyone – not even the people that caused it.

Can we please try and find a way to resolve all of this as fairly, quickly and while minimizing ongoing disruption as possible?

I simply want my life back. That requires me being out of this environment. That’s what I indicated during our first meeting over three months ago.

I deserve that. All I wanted was a house.

Thank you for your efforts.

The only response I received was from Mark Metheny on June 12, 2017. It would be the last time I ever heard from him. Here is his email indicating he would respond ASAP: 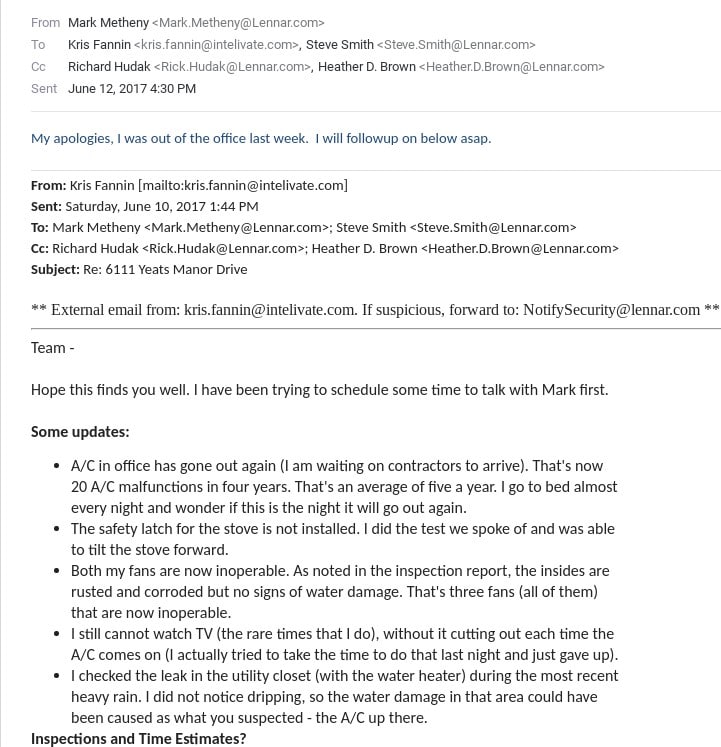 Mark Metheny of Lennar indicated that he would respond ASAP.

As a reminder, on May 31, 2017, Mark indicated I would get a revised spreadsheet with the ongoing construction defects, he wanted to schedule additional inspections with Rick Hudak, as well as an environmental company. I had also been pushing for an explanation as to why the builder’s legal response was a complete lie.

Mark Metheny of Lennar wanted to bring in an environmental inspection company in addition to other home inspections based on the numerous construction issues and evidence of metal corrosion.

Perhaps, they were starting to realize what I already knew – this place was a liability and that liability went well outside of just my home.

I never heard from the three of them again. Ever. Not once.

Mail from @Lennar They think I would buy another house from them when they wouldn't fix the issues of the current one? #noisypipes #nofix😕 pic.twitter.com/lxdTi4IAcp

I tried one last time

After being promised a few things on May 31, 2017, and still not having heard anything from my previous communications, I sent a follow-up email to all of them, including Mark’s assistant, Heather Brown. 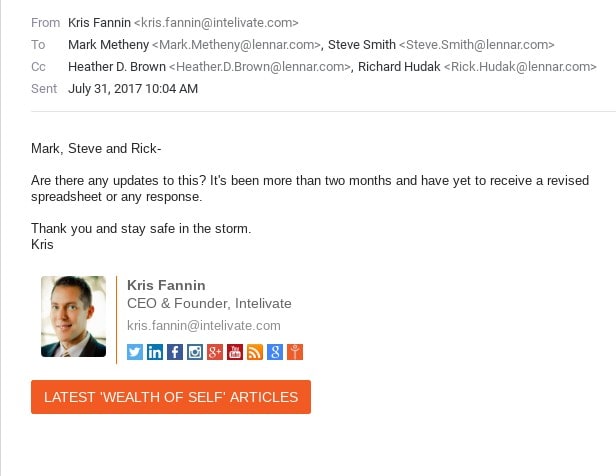 “Mark, Steve and Rick-
Are there any updates to this? It’s been more than two months and have yet to receive a revised spreadsheet or any response.
Thank you and stay safe in the storm.
Kris”

The only email I received back was an undeliverable message from Mark Metheny’s assistant’s address, Heather Brown. I wonder why she left? 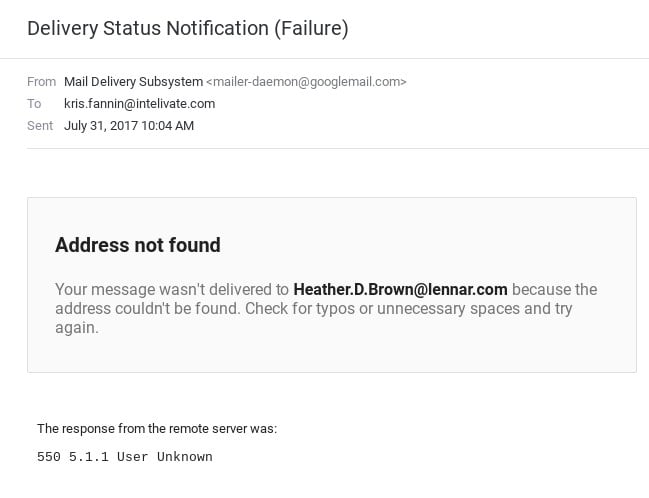 Interestingly enough, Heather also accidentally joined this Google photo album of almost 300 pictures of the Lennar construction defects I shared during my first meeting with the Lennar four executives at my home. It’s open to anyone with the link and does not need to be logged in to view. This link was passed back and forth in many of the emails she was copied on between the Lennar team.

You know you scored a genuine Lennar home when #mold starts growing on your furniture. #mylennarhome #fraud @AGPamBondi pic.twitter.com/V6vDTI8NCJ

Next Lennar communication: Email to Lennar C-Suite: “I Would Like to Give This Team the Benefit of the Doubt”

This is how my 3 small children get to eat their Christmas dinner. Our master shower has leaked on to our dinning room…