After discovering that a factory was once on the land we call home at the Lennar-controlled community, Westshore Yacht Club, I contacted the EPC and the DEP for more information. Here are some of the shocking things I learned.

This was not an easy process. Nobody seemed to know who was responsible for what, although they did their best.

I sent them several pictures to examine relating to metal corrosion and rusting in my home, as well as the illnesses not only I had experienced in the Lennar home, but also the symptoms of others that spent any significant time in this home.

Transcript of EPC findings to Westshore Yacht Club land use

Here is the information that you requested:

I looked at Google Earth history, and the houses north of him, and the block to the west were built in 2006, and they may have Chinese drywall.  The links below show how to evaluate a home for this condition.  His home was built in 2013, which makes Chinese drywall unlikely.  However, some of his complaints do fit the profile.

Here is a DOH webpage [sic] concerning Chinese Drywall and how to evaluate for its presence.

I checked the address on our RTS database. We have a closed petroleum cleanup file (FDEP Facility ID #298734863) for Tampa Shipyards Inc. at that address. An SRCO [sic] dated 8/31/01 for an 8/13/98 used oil discharge was issued by the FDEP, and a No Further Assessment Approval Letter dated 5/26/06 for a 12/16/05 hydraulic fluid discharge was issued by the EPC (Mike McKelvey). Both discharges were located on the western portion of the facility and were cleaned up several years ago.

I checked, and we have a hard file for the facility in our closed petroleum cleanup files (pink files) section. Even though the petroleum has been cleaned up, I’m not sure that petroleum would cause the corrosion of metal. Did the homeowner have indoor air testing performed by a professional to determine exactly what is causing the corrosion of metal in his home? It might by [sic] a Chinese drywall problem, as you say. The site is also right next to Tampa Bay, and salt spray (aerosol) might also be a corrosion problem, as well.

At this point, if you still have concerns, you may want to look into hiring an Environmental Professional to evaluate your concerns inside of your home. 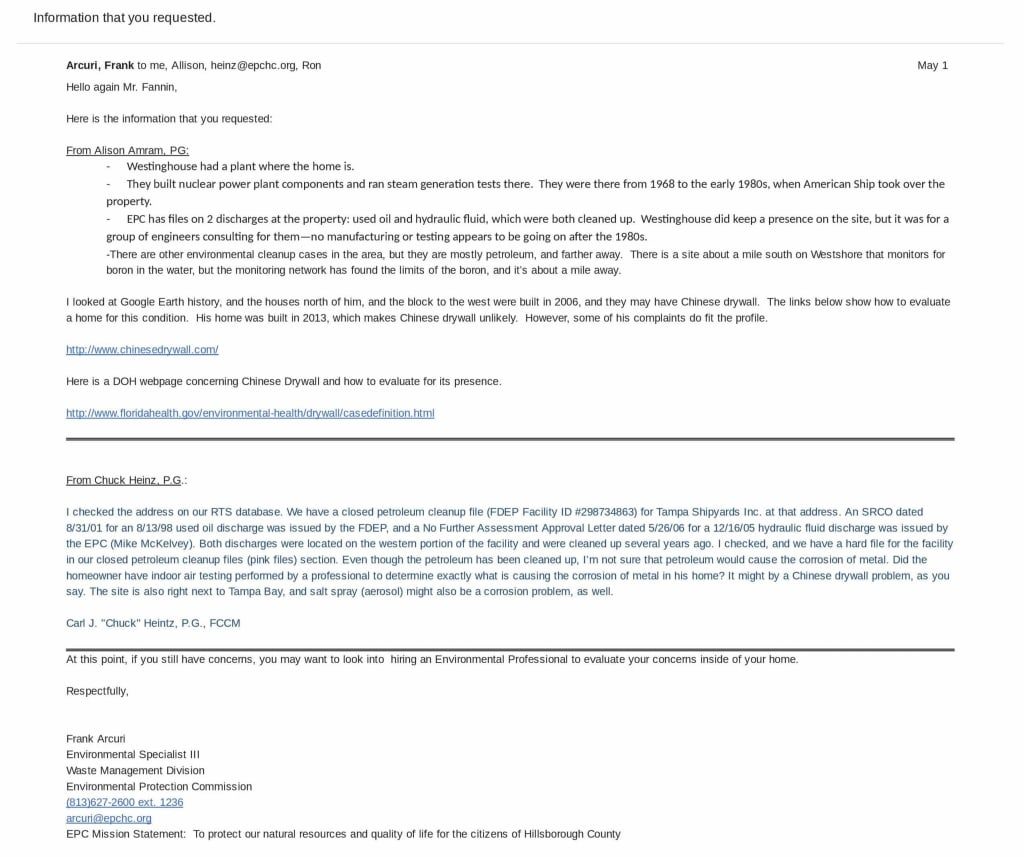 The original email from EPC’s Frank Acuri can be found here. I replied with this email: 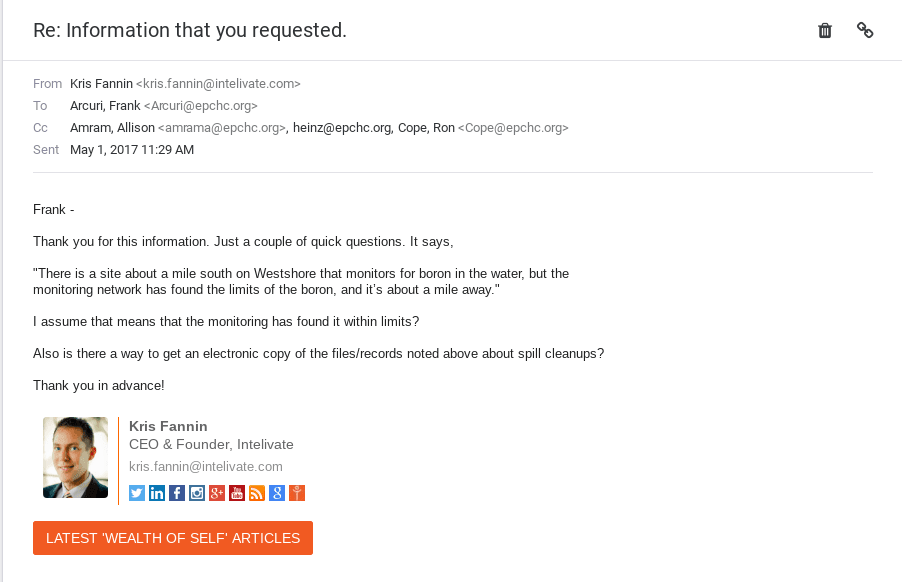 Email to EPC about the land nearby Lennar’s Westshore Yacht Club.

I received this email back from EPC’s Allison Amram: 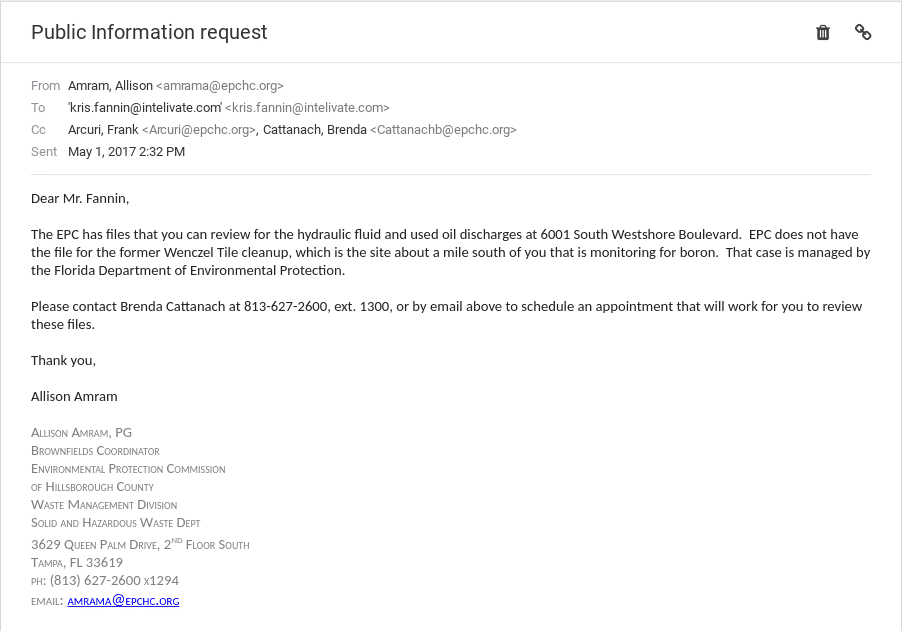 There were two chemical spills in the neighborhood that have since been cleaned. The location was declared a small quantity generator site. Here is the Westshore Yacht Club Westinghouse Registration PDF that Bob Sellers of the Florida DEP emailed to me. 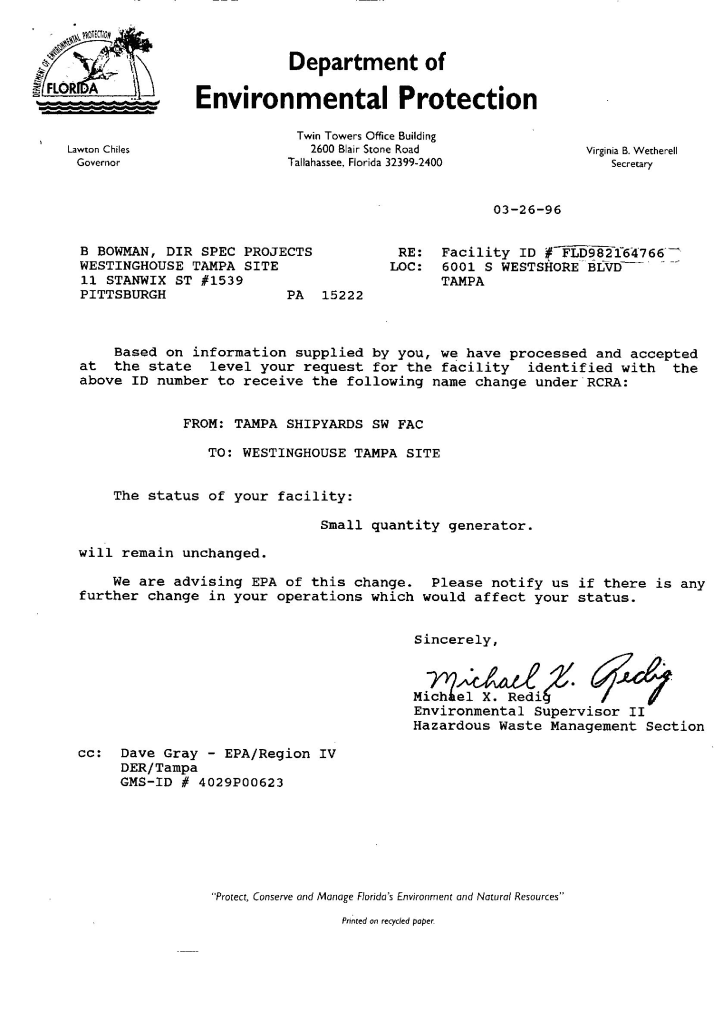 There is no evidence or documentation of any land remediation performed after the factory and structures were torn down. Both the EPC and DEP confirmed they would have a record of this type of remediation.

Land remediation is not required. This shocked me. Basically, anyone can build on anything (in the most simplistic terms). However, as I was told,

“The EPA recommends brownfield remediation to avoid impacts to health, life, and structure and for businesses to avoid lawsuits.”

According to the EPA,

“Brownfields are properties that may have hazardous substances, pollutants or contaminants present. Cleaning up and reinvesting in brownfields protects human health and the environment, reduces blight, and takes development pressures off greenspaces and working lands.”

In the most simplistic terms, brownfield land was once industrial, contains soil and land pollution, and should be remediated before residential or mixed-land use. Once remediated, it is classified as a brownfield redevelopment.

A brownfield often contains too much land pollution for conversion – many times determined by the sheer effort and money required to clean soil pollution. Wikipedia has more information on brownfield land as well.

Here is a document by the EPA explaining the complications a brownfield redevelopment. Bottom line – it is a lot of work with extensive testing and then thorough cleanup and remediation to ensure there is no remaining land pollution or soil contamination.

From all accounts, WCI Communities (now Lennar) just tore the factory and buildings down and started building homes.

Ironically, WCI Communities boasts of reusing the material from the $3M structure tear down,

Pam Cox, former public relations director for WCI, said two existing structures — the Westinghouse factory more than 70,000 square feet along with an office complex that sits next door — are coming down. The factory once manufactured turbine engines used on nuclear submarines.

“We’re recycling as much of the material as we can to use in new construction on other sites,”

“We can actually do some good with it rather than just throw it into some landfill.”

Gee, thanks, Pam Cox and Lennar. Let’s not forget that we also live feet from a 46-year old jet fuel pipeline at the Westshore Yacht Club.

“Is it Chinese drywall?” No.

I get that question all the time. You can even see that referenced in the EPC response.

Chinese drywall hit the state hard. Many lives and homes were affected.

The reason I’m asked if it’s toxic Chinese drywall is that the issues are very similar. Toxic drywall affects metal (especially pipes), electrical and air conditioner units extensively. Proper remediation is tearing down the home to the frame and starting again.