Shortly after our confusing conversation on August 14, 2017, Jim Yeadon of Lennar confirms that both defective A/C systems will be replaced and we start coordinating the dates.

I send this email to Jim on August 18, 2017 (I’m adding links to other communications and articles if you need context or more information):

Per our discussion on Monday, August 14, 2017, I am still reviewing notes and discrepancies that were determined on the last conference call with your leadership, Mark Metheny.

In the interim, I would like to schedule the replacement of the A/C systems as indicated in the August 10, 2017, letter from Christine Green, Associate General Counsel.

As you recall, although the letter indicates ‘system,’ you assured me that Lennar means the entire property which includes the separate system in the guest retreat. As you can imagine, since it continues to develop mold even after cleaning and has cut gaps at the ceiling, it is of utmost importance that this be replaced as soon as possible. This was also a part of my original confusion as the original report made no mention of the extensive, visible mold on the system nor the gaps in the back of the system.

The referenced items are in the document, Fannin – Exhibit B to the Work Authorization and Release 5-19-17.

If you could please provide me some dates as well as an estimate of the amount of time each replacement will take, I would be grateful. I would prefer to not have both systems out at the same time given the temperatures and to minimize any further disruption to my work.

In reality, my ‘reviewing notes and discrepancies’ was actually for this website. I was starting to organize everything, because I was tired of doing the work, being ignored and feeling confused by all the contradictions from the ongoing communications with Lennar.

If I was going to put the effort in, it was going to be for my benefit to never have to explain and re-explain all of this constantly. I wasn’t the one that just stopped communicating, so I wasn’t going to continue to do the work for Lennar. It had been a very long more than four years at this point, and I was sick and tired of having to constantly reset everything because of this builder.

We stand ready to make the HVAC repairs as we discussed, this includes replacing both units. When would you like to schedule these repairs? One unit will be replaced daily over the course of two days. The work will be conducted between 8am and 5pm. Lodging accommodations will not be required. Please advise.

Email from Jim Yeadon of Lennar.

That’s horrible! You purchased a new home and the builder put a defective AC unit that’s causing Health problems. I know they only care about selling homes but they have a responsibility to rectify this ASAP! #anotherlennardissapointment

Thank you for this update. I didn’t want to send this to everyone on the list.

First, sorry for the delayed response. I had a family emergency week before last that took me out for a while and then became really sick myself. I am just getting back to trying fulltime.

If I could ask until early next week to coordinate appointments and then get you the other information for the other repairs, I would much appreciate it. I am just trying to get caught up as quickly as possible at this point.

There is also some noxious smell/gas coming from the upstairs cabinet (the pipes inside). I need have that looked at before I bring the dogs up here because it even gives me a headache.

Thanks for your understanding. Sorry – I didn’t want to do a reply all to everyone else on the HVAC email. 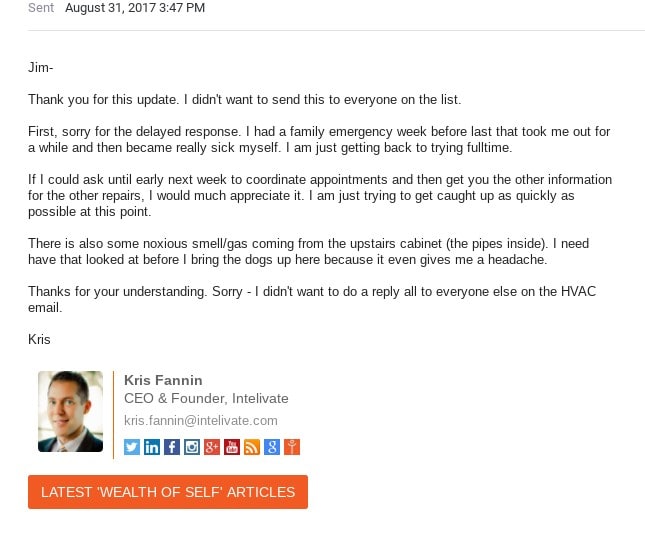 Guess what had happened right before I got sick? I had another A/C outage and got sick after the repair. Very similar to after the first Lennar inspection that seemed to make me sick. It always seems to happen when the attic is open and repair people are up there shifting everything around.

A/c problems? Found out cold air returns DO NOT connect to air handler, they are dummy vents. All flexible "duct work" NOT PROPER! This is why the system struggles to circulate the air! No returns on first floor either. @MyLennarHome pic.twitter.com/NEZCmyoDPR

Everything with Hurricane Irma started right at this time. The entire state of Florida started tracking the hurricane shortly after this so things became understandably delayed.