I receive an email from Jim Yeadon of Lennar with another legal letter regarding the improperly installed A/C units in my home. Based on past communications, it should be no surprise that Lennar gets it wrong again.

After confirming with Lennar’s Jim Yeadon that what was meant in the confusing original legal letter from their CEO was that Lennar was indeed replacing both improperly installed and moldy A/C units, we all became consumed with Hurricane Irma for a while.

Although I had sent two emails since and heard nothing from the last email, I get an email from Jim Yeadon on October 30, 2017, that has a word document attached and reads: 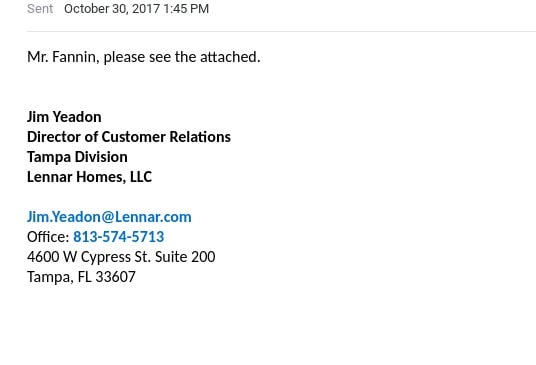 Jim Yeadon of Lennar sends another legal letter to me on October 30, 2017, regarding the improperly installed A/C units by the builder at the time of construction.

Great, another letter was clearly written by their legal department.

Again, this is part of the reason I developed this site to keep track of all the communications happening around 80+ ongoing Lennar construction problems.

Here is the letter sent by Jim Yeadon but obviously written by Lennar’s legal department:

This letter follows my email to you dated August 29, 2017 and Lennar’s August 10, 2017 correspondence offering to perform repairs to the HVAC system in your home. During a telephone conversation shortly after our August correspondence, we discussed that the offer included repairing both HVAC systems and we provided an estimate of the amount of time necessary to perform the work.

Approximately two weeks later, on August 29th, I reminded you that Lennar is prepared to perform the repairs as previously discussed and requested that you provide us with convenient dates to have the work performed. During our conversation, I explained to you that two days are necessary to complete the repairs because one HVAC unit will be replaced each day between the hours of 8 am and 5 pm.

However, two days later, on August 31st, you explained that you were unable to provide us with dates to perform the repairs because of an illness that required your availability for personal appointments. You also mentioned gathering additional information regarding the repairs.

We have not heard from you since the August 31st telephone call. Please note that Lennar remains ready to perform the HVAC repairs, and you may contact me at your earliest convenience to schedule the work. This offer remains open until 5:00 p.m. EST on November 5, 2017, at which time the offer is automatically withdrawn. I look forward to hearing from you. 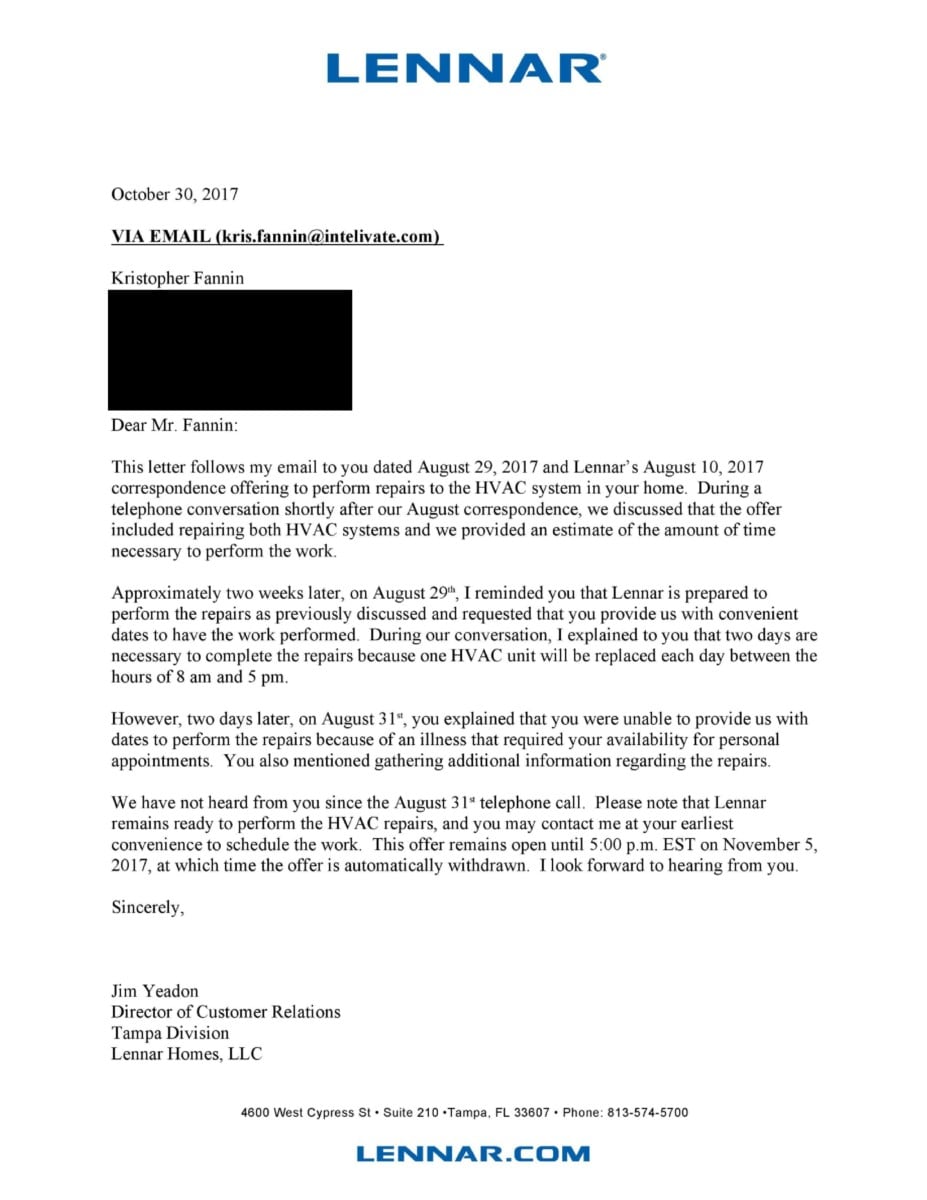 The letter regarding the defective A/C systems dated October 30, 2017.

My next email to Jim would be to specifically address the mold issues that I was told would be inspected and remediated during the last conference call in May and before the Lennar executives working the issues went completely silent.

A/c problems? Found out cold air returns DO NOT connect to air handler, they are dummy vents. All flexible "duct work" NOT PROPER! This is why the system struggles to circulate the air! No returns on first floor either. @MyLennarHome pic.twitter.com/NEZCmyoDPR